Finding a good rent a car company in some cities can be a hard task, that's why we provide a car hire search engine that makes the booking process very easy and quick.

Click on your favourite destination to get more information about the area, like situation, history, places to visit, activities and useful tips.

Remember to book your car as soon as possible to get cheaper prices. When car rental companies are out of cars they use to raise the rental prices (sometimes up to 100%!). 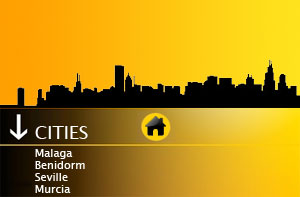 Alicante Car Hire
The beautiful mediterranean city Alicante is situated at Spain’s famous Costa Blanca, protected by hills in the north that grant the whole area a mild climate all year round. The wide sandy beaches of Alicante with crystal clear water are famous. The lively University city has a great variety of monuments and as well a great night life to offer.

Almeria Car Hire
Almería is a coastal city with a seaport that offers connections to the Moroccan coast. The University City of Arabian origins has an interesting historic and artistic patrimony. Alongside the coast and in the interior we can find remains of watchtowers. The province itself has very interesting geographic contrasts from high mountain ranges over semi deserts to virgin beaches. The symbol of Almería is the Indalo.

Barcelona Car Hire
Barcelona city is a lively multicultural mediterranean city, where merge a great historic and artistic patrimony with modern lifestyle. The University City has plenty of monuments and cultural life to offer and as well the close by beaches of the Costa Brava. The city is definitely worth a visit, even for a weekend trip.

Benidorm Car Hire
Benidorm is situated on the northern coast of the province Alicante and 50 kilometres from Alicante city. Benidorm is one of the most important Tourist Resorts of the Costa Blanca and the whole Spanish Mediterranean Sea due to its fabulous beaches and the bustling nightlife. The city is well connected with the motorway AP-7 and the national road N-332, busses and train.

Girona Car Hire
The city of Girona with its river Oñar has a very rich cultural patrimony that is often not taken notice of, as many travelers use the city´s airport to transfer from one airport to another. In the charming city we can find Europe’s oldest and best maintained Jewish quarter and the city itself with its many bridges and monuments is at least worth a daytrip.

Granada Car Hire
Above the ancient city of Granada with its immense historic and cultural patrimony, towers the Arabian fortress Alhambra, a declared world heritage site, with the snow-covered peaks of the Sierra Nevada behind. The lively University City has plenty of monuments to offer, a bustling nightlife and is well-known for its typical Tapas. The fantastic views are famous and have inspired poets and visitors.

Ibiza Car Hire
Ibiza city has gained fame during the last decades for its cheerful and hilarious lifestyle during the summer months, with a bustling nightlife, cafeterias, bars, restaurants discotheques and designer parties during the night that combine with heavenly bays of fine white sand and turquoise waters during the day. A paradise on earth.

Jerez Car Hire
Jerez city is worthwhile a visit due to its rich cultural heritage with remains from Roman and Moorish times together with many civic buildings and museums; the old part of the city is declared as historic and artistic centre. The city of Jerez is famous for its wines, its horses and as well it it’s the cradle of flamenco art. Jerez is about 30 kilometres (18 miles) from the Atlantic coastline known as Costa de la Luz.

La Palma Car Hire
Santa Cruz de la Palma is a picturesque and charming city with an important harbour. The city is situated on the east coast of the volcanic canary island La Palma. Its steep streets are due to the great height of the island volcano Caldereta that towers behind the town and gives the whole island it´s characteristic beautiful uniqueness.

Madrid Car Hire
Madrid is the capital of Spain and the economic, financial, administrative and geographic centre of the country. Visitors will find a huge offer of Theatres, Museums, Monuments, Concerts, Literature, Cinema, Expositions, together with street life, bars, terraces, cafés, restaurants and an animated nightlife.

Malaga Car Hire
Malaga city is located in a natural bay and surrounded by mountains; two rivers pass through the city on their way to the Mediterranean Sea. After the pace of many historic civilizations, the capital of the province with the same name shows the visitor a rich architectural and archeological patrimony; in the midst of its historic centre with religious and civic architecture, parks, gardens and Museums, you can enjoy Theatre, Concerts or Art Galleries.

Mallorca Car Hire
Palma de Mallorca is the capital of the Balearic Island Mallorca and the administrative centre of the Balearic Islands. The city is situated in the south-east of the island and is well connected via air and sea with the other Balearic Islands, the Spanish mainland and a great number of international destinations. Apart from wonderful beaches and bays, Mallorca offers plenty of leisure time activities as for instance Golf, Navigation and Nightlife.

Murcia Car Hire
Murcia, capital of the province with the same name and of Arabian origins, is situated in the southeast of Spain, at the riverbanks of the Segura. The University City itself is situated a one hour's drive from Costa Cálida by the Mediterranean Sea and the Mar Menor and the mayor tourists resorts as for instance Torrevieja, San pedro del Pinatar or La Manga del Mar Menor. The fertile region Murcia is known as the orchard of Spain.

Seville Car Hire
Seville is the capital of Andalucía, situated in the southwest of Spain. Seville is one of the most important cities in Spain´s history since ancient times and the city´s historic centre is one of the most extensive in Europe. Seville lays on the Riverbanks of the Guadalquivir and is the only river port in Spain, due to which existence Seville became the economic centre of the Spanish Empire after the discovery of America.

Tenerife Car Hire
Santa Cruz de Tenerife is the capital of the Canary Island Tenerife, located in the northeast at the shores of the Atlantic Ocean. The city is placed between the bay of Santa Cruz and the mountains of the Anaga. The cities origins date 2000 years back to the occupation of the islands former habitants, the Guanches. Santa Cruz combines modern lifestyle of a big city with the splendorous beauty of its volcanic surroundings and beaches.

Valencia Car Hire
The spectacular historic centre of Valencia is very well preserved and presents an interesting mix of Roman, Moorish and Christian civilizations that have passed through the 2000 years of history of this city. Very appealing is the contrast of gothic, baroque and classical buildings with modern and even futuristic architecture such as the famous City of Arts and Sciences, along with museums, theatres and art galleries.

Faro Car Hire
The Portuguese city Faro is the capital of the Algarve region. The city is well connected through an international airport and an international motorway (Seville, Huelva). Although the city in the past had suffered lootings and an earthquake, there still exist some beautiful remains of Arabian and roman epochs. Close by to Faro city we find the famous Natural reserve Ría Formosa.