We offer car hire services inside any airport in Spain and Portugal.

Find below a list including the most popular Spanish airports, as well as relevant information of the airports (you can find further information inside the airports' pages).

Detailed information about arrivals, departures, shops and services offered inside each airport can be found at www.aena.es, the Official Airport Authority website.

Not only do we offer car hire at any airport in Spain, we also provide cheap car hire in Spanish cities. 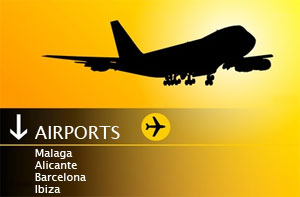 Alicante Airport Car Hire
The international Alicante Airport is situated 5.6 miles southwest of the city Alicante and serves as access airport for all the tourist resorts along the Costa Blanca, such as Denia, Calpe o Benidorm. Alicante Airport can be accessed via the Motorway A-7 and the national road N-332.

Almeria Airport Car Hire
The international Almeria Airport is situated 5.7 miles east of the city Almería, in the province with the same name, in the southeast of Spain. The Airport Almería serves as access airport for holiday resorts along the Mediterranean Sea such as Roquteas de mar, Aguadulce, Costa Cabana or Cabo de Gata.

Girona Airport Car Hire
Girona Airport is situated 7.4 miles from Girona city and about 65 miles (80 minutes drive) from Barcelona city. This airport is often used to hop from one airport to another, as it operates with some low cost companies. Girona Airport serves as access airport for the tourist destinations along the Costa Brava, such as Empuriabrava, Roses, Tossa de Mar or Lloret de Mar.

Ibiza Airport Car Hire
Ibiza Airport is located in the south of the Island and 4.6 miles south from Ibiza city. The airport is the principal ways of communication between the Spanish mainland and the other Balearic Islands and is used by 95% of the visitors that come to the island. Ibiza Airport covers a great number of international airlines that offer this destination and is well connected with the mayor tourist resorts during the summer months.

Jerez Airport Car Hire
Jerez Airport is situated 5 miles northeast form Jerez city. It is the only civic airport in the province of Cádiz and provides access Cádiz city and to the tourist destinations along the Costa de la Luz as for instance Doñana, Sanlúcar, Conil, Barbate, Tarifa. The airport receives mainly charter flights from Spain, Great Britain and Germany.

La Palma Airport Car Hire
The La Palma Airport is located in the east of the island, 5 miles from the capital Santa Cruz de la Palma. The airport is mainly served by national inter-island flights from the mayor islands Gran Canaria and Tenerife and a smaller number of international regular and charter flights.

Malaga Airport Car Hire
The international Malaga Airport is located 5 miles from Málaga city and serves as access to all the tourist destinations along the Costa del Sol, such as Nerja, Malaga city, Torremolinos, Benalmádena, Fuengirola, Marbella, Estepona or Benahavís. Malaga Airport has daily flight connections to twenty Spanish cities and to more than 60 countries worldwide.

Mallorca Airport Car Hire
Palma de Mallorca (Majorca) airport is situated 5 miles from Mallorca city. The airport is the main access to the Balearic Islands of Mallorca, Menorca and as well for flights to the neighboring islands Ibiza and Formentera. Mallorca Airport receives mainly international traffic from Germany and Great Britain and as well the Spanish mainland.

Murcia Airport Car Hire
Murcia, capital of the province with the same name and of Arabian origins, is situated in the southeast of Spain, at the riverbanks of the Segura. The University City itself is situated a one hour’s drive from Costa Cáilda by the Mediterranean Sea and the Mar Menor and the mayor tourists resorts as for instance Torrevieja, San pedro del Pinatar or La Manga del Mar Menor.

Seville Airport Car Hire
Seville Airport is located 10 kilometres (6.2 miles) northeast of the Andalusian capital. The airport serves mainly for national traffic and as well international flights and is about 100 kilometres (62 miles) from the Atlantic Ocean and tourist destinations like the National Park Doñana, Sanlúcar, Cádiz or Conil.

Tenerife Airport Car Hire
The airport Tenerife Sur is situated in the south of the island, approximately 60 kilometers (37.2 miles) from the capital Santa Cruz de Tenerife. Tenerife Sur receives numerous international regular and charter flights and has as well flight connections to the other Canary Islands, although for that purpose is more indicated Tenerife’s second airport situated in the north of the island.

Valencia Airport Car Hire
Valencia Airport is located eight kilometres (5 miles) west of Valencia City, capital of the province with the same name. The airport operates a good number of flights, both regular and charter on national level and about 15 European countries and is close to the famous and splendid beaches of the Costa Blanca and the mayor holiday resorts and cities such as Denia, Calpe, Altea, Benidorm, Villajoyosa, L´Albufera or Benicassim.

Faro Airport Car Hire
Faro Airport is situated 4 miles west Faro city. It is an international airport that receives a large number of flights from many European destinations and serves as access point to all the destinations and tourist resorts along the Portuguese Algarve, as for instance Albufeira, Portimao or Lagos.